Graaff-Reinet is a town full of rich cultural history and is known by many as the “Gem of the Karoo” but Union Pre-school is our own little “Gem” in the middle of town. We are surrounded by majestic mountains and gracious landscapes.

We invite you to explore a world of fun-filled development and school readiness programs, where our children are taught to grow into superb individuals.

Each with their own unique attributes and qualities,their own dreams and goals and their own abilities!  Giving them confidence and equipping them with lifeskills and foundation phase learning.

It is our motto to allow our youngsters to develop at own pase and to involve the parents in all aspects of the school, as to build a healthy teacher-parent-child-teacher cycle. 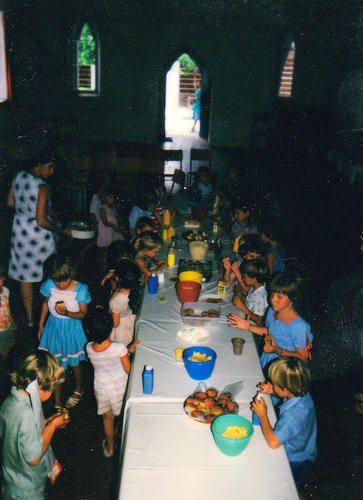 The School was founded by Mrs Denise Welden in 1981 at St James Anglican Church Hall. It started out as a "Playschool" for farm children to come on Mondays and Fridays, but town children joined as well, namely Janine Sullivan and Alfred Thornton. A monthly fee of R20 was charged.

Jill Wilson joined Denise in 1982. After Denise left at the end of 1983 the school moved to the Catholic Church Convant building. In 1989 Mrs Anne Beagley took the reins and was followed up by Mrs Fuchs in 1992.

In 1991 Mrs Sue Olivier came onboard and became teacher in charge in 1994, and is still with us today.

On Thursday, 15 June 2017, the Chairman of the Board of Trustees, Mr Derek Light, signed the contract with Mr Raymond Smith of Perfecto Builders, for the construction of the new Union Pre-school on the corner of Park and Donkin Streets. The construction of the building, designed by Mr Bernie Weyer of Waterston Weyer Roon Architects, commenced on 3 July 2017 was completed and handed over to the Union Pre-school Governing Body on 11 December 2017. The new school, boasts four large classrooms and modern facilities and opened to receive learners in January 2018. It is situated conveniently opposite the high school and allows the pre-school learners access to all of the school’s facilities and fields.

We have 95 enrolled children, 4 teachers, a cleaner, gardener and secretary.